Matthew “Val” Taylor, the Road Captain in the club, was introduced to sex at an early age. Saved from the streets by the club’s Enforcer and President years ago, Val now lives for women and the open road. Until the night the only woman he’s ever loved is almost killed. Val determines to change his ways and be the man Zoann Donovan should have and the father their son deserves.
Zoann has loved Val for a long time. Violence and bitter betrayal forces her to ignore her feelings and distance herself not only from the sexy RC, but her beloved brother, too. Until she discovers the truth. Can Zoann ever be forgiven for all the pain she’s caused? Will Val overcome his own demons and have a future with her and their son? Who will survive in an MC filled with lust and revenge, love and hate?
Warning: This is a tale of rape, murders, deception, heartache, lies, and infidelity. The road to redemption is a tumultuous struggle where only the strong survive and justice is served…Outlaw-style. 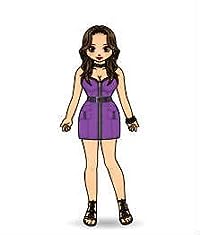 In Kat's head, she's the ultimate biker babe. In reality, she is an ordinary, everyday person who loves scotch, reading, writing, and football.