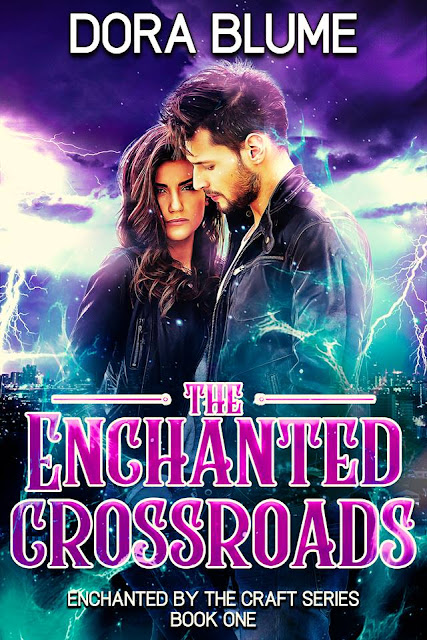 Would you give up everything to save the world?

Kaira lived a normal existence in Minneapolis, MN. One night she met a mysterious man, she was instantly attracted to him. She couldn’t explain it, but she wanted him. Leif drove her safely home from the bar. Entering her apartment, she was attacked.

Morrigans were after her. Leif came to her rescue but at what cost? She wasn’t willing to give up her life as a lawyer to fight Morrigans. She didn’t care about her power or Leif trying to help her understand the new magical world. She wanted no part of it. She saved people in her own way, as a lawyer, fighting against the Opioid crisis.

Hecate, the Goddess of Mages, came to give her a choice. She was born a descendant of the Goddess and only her and her four siblings could end the God, Morrigan’s destruction of good witches everywhere.

Was she willing to give up her whole life for the cause? Would she give up Leif to go back to her normal life?

Read the gripping first instalment of the Enchanted by the Craft Series.

Page 74- I touched my lips lightly to his, seeing if he’d kiss me back. For a moment, he didn’t respond. My lips on his, a torturous beat ticked on the clock. Oh my god, what am I doing? He doesn’t like me like that. I began to back my mouth away from his. Shock and hurt filled me to my core. Then, his arm encircled my waist and he pulled me into him. His lips pressing against mine in a passionate embrace. My breath caught and I opened my mouth. His tongue slipped between my parted lips, lavishing my tongue with skillful strokes. He gripped me against him. I lifted my hands and laced them behind his neck, lightly stroking his hair. He let out a growl against my mouth when I gripped my hands in his hair and lightly tugged. He nipped my lip in response.

“You don’t understand the rules of our world. Sex isn’t something that’s taken lightly among Mages. We take our responsibility of procreating seriously. We don’t just hook up like humans do. When we’re together, it’s because we’ve made a serious commitment to each other. You’re not even sure you’re going to continue to be in our world.” His hands dropped from mine and his eyes stared at a spot on the floor.
Page 94- “God, you’re insufferable. You don’t see it, Kaira. You’re an amazing woman.” He lifted his hand to my chin and turned my face to meet his. He inched closer to me. My eyes grew wide before his lips touched mine. At first, he touched my mouth lightly. When I responded and flecked my tongue along his bottom lip he responded. His mouth became a crushing force on mine. His lips moved, hungrily, sucking and nipping at mine. I had never felt so much passion in a kiss. Most guys I’d been with were nothing like this. I felt the kiss throughout my body. I hungered for more. I felt his hands brush against my leg. He moved his hand up, splaying his hand on my back, pulling me closer to him. I wrapped my hands around his neck and stroked the hairs. I felt his intake of breath. After a moment, he backed away from my mouth.

Page 86  “Maybe I’ll introduce her to Haskell. That could be interesting.” He smirked.
“Oh yeah, Mr. sexual innuendo meets, I’ll electrocute your balls if you speak to me like that. Should be a riot.” I rolled my eyes.

“Could you two get a room or something? Or at least refrain from the lovey shit at the kitchen table. Some of us would like to keep our food down.” He rolled his eyes and focused on the boxes again.
“You’re just jealous, you don’t have a girl of your own.” Leif said.
Haskell’s eyes went wide. “I’m not jealous. Wait until you realize all the problems you’ve gotten yourself into because of her. First, it’ll be the little things. Like not ordering orange chicken because your girl likes sesame.” He gave Leif an annoyed stare. “Then, she’ll want new furniture in the house because the stuff you have is too masculine. Before you know it, everything around you has changed, and you’re running to the store to buy tampons because she just didn’t want to leave the house. I’m telling you man, it’s all downhill from here.” He shook his head and shoveled a forkful of noodles into his mouth. Two, clung to his chin before he slurped them up into his mouth.

Dora Blume is a middle school English teacher by day, writer by night. Dora has a Master’s in English studies. She lives in Cannon Falls, MN with her two small dogs, Jack and Bailey. In her sister time, she reads books, lots of books.